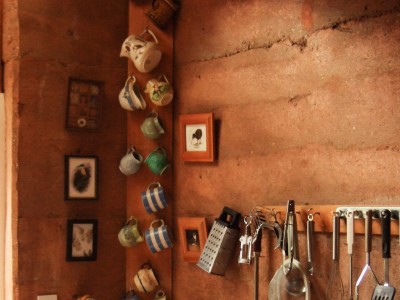 Rammed earth (pise de terre) is an ancient technique that has been dated back to at least 7000 BC in Pakistan. It traditionally has been used in many structures around the world, some of them up to seven storeys high (Germany and Yemen). Although most rammed earth buildings today are single- or two-storeys, a five-storey hotel has recently been completed in Australia. Today the biggest innovations in the technique are made in Australia, France and Austria. In New Zealand, Rammed Earth is the most popular earth building technique next to Adobe brick and pressed soil-cement brick construction.

Rammed Earth walls are formed from soil that is just damp enough to hold together. The earth is tamped between shutters with manual or pneumatic rammers. The shutters can be removed immediately after completion of a wall panel. The shape is limited to what can economically be built with the removable shutters. The walls are often left as they are "off the form" and reveal an appealing strata pattern from the ramming process. The surface of the wall can be additionally sculpted to a certain degree, while the earth is still damp.

This technique is very labour intensive and requires a lot of experience. Consistent workmanship is critical for both the appearance and the strength of Rammed Earth walls, so site work has to be of high quality.

One difficulty with Rammed Earth is that strict limits have to be placed on shrinkage to eliminate cracking. A sandy crumbly soil with a clay content around 15% is best.

Often cement or hydrated lime is added to improve durability and for shrinkage control. This however isn't always necessary, as many successful structures have been built just from suitable soil without such additives.

The Rammed Earth technique is accommodated in the New Zealand Earth Building Standards.

Cob is an old technique. Next to Adobe brick construction it is the most common earthbuilding technique used by the early settlers in New Zealand. Especially on South Island there are many old Cob cottages and homesteads which are still in good condition.

Cob construction involves layering a mix of gravely clay and straw directly onto the emerging wall without the use of mortar or a framework. The rough surface is later trimmed up and usually rendered, which leads to a soft, undulating look of the walls.

Because of the comparative lack of modern experience with Cob in New Zealand, the technique is included in the Earth Building Standards only as an informative section.

Building consents for Cob can be obtained, but it would have to be processed under the "alternative solutions" pathway of the Building Code.

This too is an old technique, which has often been used in medieval Europe. In New Zealand there are examples which have stood the test of time, but Wattle and Daub is seldom used nowadays.

Wattle and daub starts with a lattice of vertical studs and horizontal wattles, worked together like a basket. A mix of earth and straw is then daubed onto this latticework, forced into the gaps and smoothed over to fill any cracks. The surface can be left as a rustic finish or rendered for a smoother finish.

Wattle and daub walls are non load-bearing and are built into a wooden framework. The wall can range from 150 to 200 mm in thickness and this makes the technique attractive for dividing interior spaces with light walls.

This technique is also suited for a more experimental approach to Earthbuilding. The latticework can have nearly any shape. Together with the earth mix very firm "objects" up to 2 meters high can be built.

Building consents for this technique have to be processed under the "alternative solutions" pathway of the Building Code. 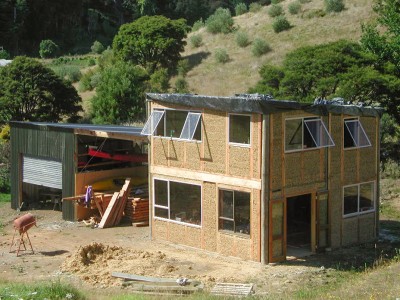 Light Earth is very common in Germany, where the insulation properties of this construction are highly valued. For the colder regions of New Zealand it could be an interesting option, even if the framework can require as much timber as a stud wall.

Light Earth involves tamping a clay mix containing a lot of straw or untreated woodchips into a timber framework and then cladding both faces. The method combines the good insulation property of the light additives with the advantages of earth. The construction is fireproof and very durable, because the clay acts as a natural preservative of the timber construction.

As with other earth building techniques, Light Earth balances the indoor climate, especially the moisture of the air. Because of its relatively low weight, it isn't suited to contribute to the thermal mass of a building so much. The construction acts more as a form of insulation, and therefore is mostly specified for external walls.

The material needs a waterproof cladding on the outside. This needs careful attention, because the wrong exterior finish can result in serious damage of the Light Earth filling.

On the inside the walls can be finished off with an earth plaster.

There is a lot of modern experience with this technique in Europe, but not in New Zealand. Here the technique is quite common historically and there are some well-maintained examples. But the technique is seldom used here nowadays and is not covered by the NZ Standards.

For a building consent a Light Earth construction has to be processed under the "alternative solutions" pathway of the Building Code.